poems on the underground – after evans

“Choose a poem that resonates with you then interpret it through photographs. Don’t attempt to describe the poem but instead give a sense of the feeling of the poem and the essence it exudes.”

Later this year, we hope to move house. One of the things we need to do to turn this into a reality is to pack things away. I have way too many books, so they need to be boxed up and made ready bit by bit. As a result most of my poetry books – all of them. actually – are now in boxes in the the attic. This is quite good as it forces me to find some new poetry to look at, for this…

This morning (21-i-16 – a month ago! bloody hell!) I noticed a new Poem on the Underground: Like a Beacon by Grace Nichols. I read it a few times on my way to work and then read it a few more as i went home again in the evening. I may have muttered rhythmically under my breath…

“Start by reading the poem a few times (perhaps aloud) and making a note of the feelings and ideas it promotes, how you respond to it, what it means to you and the mental images it raises in your mind. Next, think about how you’re going to interpret this visually and note down your ideas in your learning log. You may choose to develop this idea into creating a short series of images reflecting your personal response to the poem (or another poem). Write some reflective notes about how you would move the above exercise on.”

As I sometimes do, When I emerged from the tube, I didn’t catch the 58 from central, but instead walked down the high street with the intention of having an inter-work-and-home pint and a sit in The Chequers.

As I walked I had a fairly firm idea of the essence of the poem: a woman in an art gallery, suddenly distracted by the idea of food from home; salt fish; a carrier bag filled with food from elsewhere; a beacon… 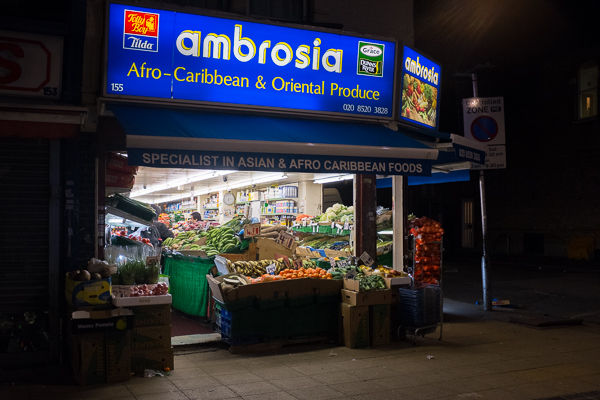 I also was taking pictures of shops at night with my x100-s  (further experiments for the remake of Assignment 1). It was dark and suddenly i realised that one of the shops – Ambrosia – stood out like a beacon. Thinking, I went to the pub, sat down with my pint in a quiet corner, got out my notebook and started jotting and associating and planning.

Here (tidied a bit) is what I jotted:

So now – a month later – I have sat down to write a shopping list for my version of the Panzani advertisement (illustration xvii) analysed by Barthes in Rhetoric of the Image and leading out from the bolded text above:

I have a string shopping bag (black not white, but not a problem); most of the things I can pick up here in Walthamstow. The haggis, I’ll cheat and get on my next trip to Glasgow and I can pick up the whisky in duty free on my way back down through GLA. My sister can pick up a copy of the paper and pop it in the post.

I have my mother’s potato masher. I might be able to fit that in…

I’d need to come up with a colour scheme evocative of Orkney and harmonious to haggis, clapshot and the other stuff. Probably an earthy brown, maybe with a hint of lichen yellow? The blue of the sea and the sky in summer? Or their wintry slate grey?

By the time of my next trip north (the 10th of March), I should be at the point of submitting assignment 2. Making a still life would be a fun displacement activity to break up (but hopefully not stop dead) writing up the assignment. I think I will…