“Imagine a magazine cover on one subject: rain. You have the entire cover space to work in, and you should produce a single, strong, attractive photograph that leaves no one in doubt about the subject. This is first an exercise in imagination, not always easy, and second an exercise in producing a photograph to a specification.”

This is what I settled on – the view from upstairs on a bus, as a woman with an umbrella crosses the road in front of us. As it is a magazine cover, it needs to be in portrait format; I cropped down to match the roughly 4:5 dimensions of the Guardian Weekend. There is plenty of space for text to be superimposed upon the image.  It works as a compendium of many of the ideas I examined while working on this exercise, during the couple of properly rainy days we’ve had recently. END_OF_DOCUMENT_TOKEN_TO_BE_REPLACED

“Produce one photograph in which it can be seen that something has happened. As a suggestion, include in the photograph something that has been either broken, or emptied”  – AoP Coursebook 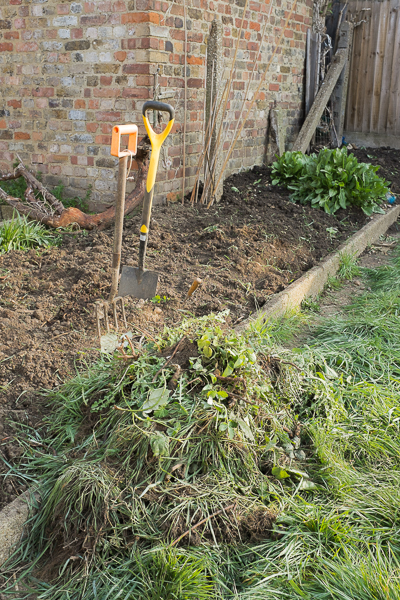 Not a set up shot, but rather then end of an afternoon’s digging out the borders when the sunlight had sunk to the point where it no longer lit the brick air-raid shelter, but was still pointing up the uneven, freshly dug earth. It’s fairly obvious what has happened and the angles of lines running through the frame and the division of the space work nicely, I think, but it would be better if the pile of dug up grass and other weeds was more obviously different from the raggedy lawn which only got cut the next weekend.