The main thing discussed during the tutorial that has lead to a revision of this assignment was that my organisation of the files, folders and instructions for my “generate my self-portrait” game was difficult to follow. I have therefore produced the revised flowchart – intended to show the way you can generate a self portrait for me using either a 6 sided die or a random dice-throw generator –  here:

I used the new instructions to generate a self-portrait and the resulting collage is included  – along with three of the original crowd source composites – in the physical submission for the assessment where it is titled PH1CAN-512973-assessment-05: 634242.

All related posts can be found either here or by using the link in the main menu at the top of this page.

Identification photographs have a number of strict rules. For example:

“The photo must be of the applicant: facing forward and looking straight at the camera in close-up of their face, head and shoulders with a recommended head height (the distance between the bottom of the chin and the crown of the head) of between 29 and 34 millimetres with a neutral expression and with the mouth closed (no smiling, frowning or raised eyebrows) with their eyes open and clearly visible […] free from reflection or glare on glasses, and frames must not cover eyes (we recommend that, if possible, glasses are removed for the photo) showing their full head, without any head covering, unless they wear one for religious beliefs or medical reasons with no other objects or people in the photo (this also applies to a photo of a baby or young child and babies should not have toys or a dummy in the photo)” – HM Passport Office – Passport Photograph Guidance

“…the photograph must have been taken within the last six months; the applicant should not look down or to either side [ …] angled views are NOT accepted; the photos must be clear, well defined and taken against a plain white or light-colored background; sunglasses or other wear which detracts from the face are not acceptable unless required for medical reasons (an eye patch, for example)” – Russian Visa Photo Specification

All of this should lead to something that is unequivocally me, but certain bits – in particular the UKPA requirement for me to take off my glasses – seem to make them remarkably unlike the Simon Chirgwin who looks out at me while I shave in the morning.

I find ID pictures suggest different personas – the harrassed middle-aged dad (my old driving licence) – or different fictional circumstances – me, chained to a radiator in Beirut (my pass for work). None of them are really me, but various officials agree to conspire with me that they are… 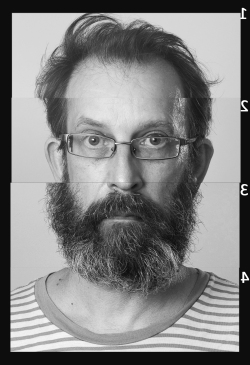 I think I have taken something with which I am very familiar, here  (my face staring out at me from the mirror) and made it strange. Or possibly stranger. I may have created a series of masks to hide behind.

I think the assignment submission contains definite performance elements (recording the removal of facial hair; masquerading as “myself”) and then transforms that record of performance into something new by seeking out online the – random – participation of others. I have succeeded in making up an online game about portrayal and Identity and getting other people to participate in it. END_OF_DOCUMENT_TOKEN_TO_BE_REPLACED

We dress like students, we dress like housewives,
or in a suit and a tie
I changed my hairstyle, so many times now,
I don’t know what I look like!

from Life During Wartime: David Byrne (1979)

A quick check of my wallet and the pockets of my jacket at any time over the last six months would have revealed at least three  – and sometimes as many as six – cards or documents whose sole purpose was to identify me to one representative of authority or another. All of them contain at least one head and shoulders photograph conforming to a very tight set of specifications relating to expression, background, angle, whether I wear my glasses or not and so on.

All these photographs are different. They each seem to freeze the me that existed at some moment in time. None of them looks particularly like the me who stared back at me out of the bathroom mirror this morning. Even moments after they had been taken – and the oldest of them still in use is almost exactly 18 years old now – they fall in some way short of how I perceive myself and indeed what I hope other people see when they look at me.

Here are another thirteen pictures of me, again made according to a strict set of rules but this time of my own devising. I have to believe (and officials need to believe) that, for a fraction of a second I once looked like the person in the pictures in my wallet and jacket. All the pictures here are identifiable as me (even # 224313) and each of them contains elements of a me that existed over the course of one day in May 2016.

But I have never looked like any of them. Not even for a fraction of a second.

If you want to conjure more Simon’s from the remaining traces of the Simon that existed on the eighth of May 2016, feel free to go here and follow the instructions.

And do let me know how you get on.

in the Chequers – playing with the pictures over a pint

I now had a large number of head and shoulders self-portraits, showing me in different outfits, with different pairs of glasses and with various configurations of facial hair. END_OF_DOCUMENT_TOKEN_TO_BE_REPLACED

Mimicking the folder I set up on my G:Drive 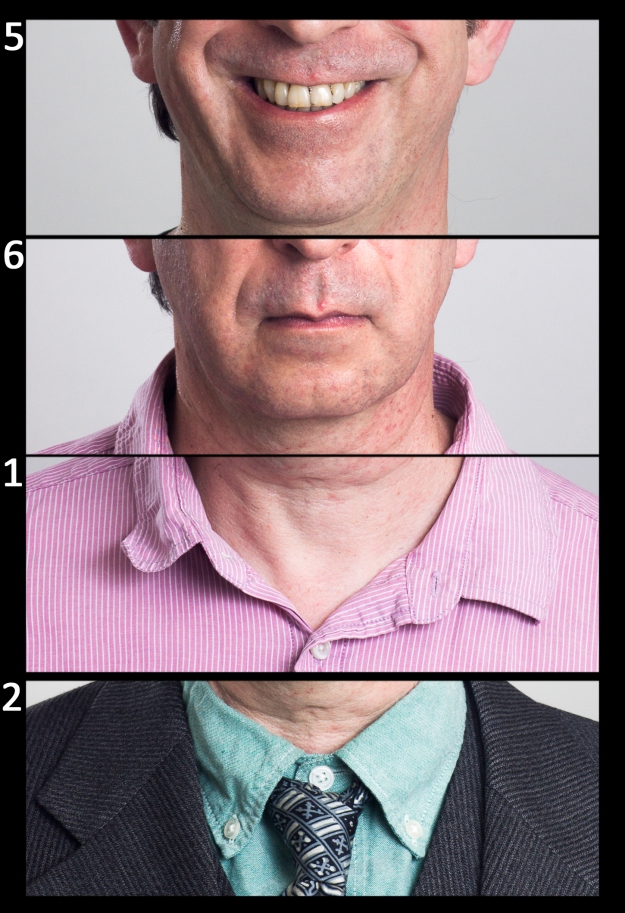 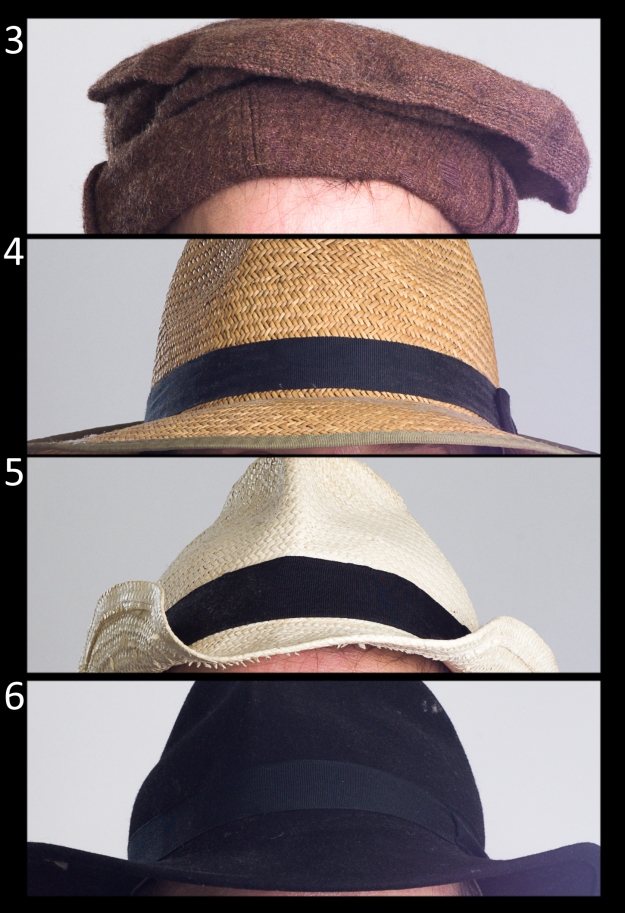 Images as made public in July 2016

We dress like students, we dress like housewives,
or in a suit and a tie
I changed my hairstyle, so many times now,
I don’t know what I look like!

from Life During Wartime: David Byrne (1979)

Here are three ways you can help me remember what I look like. They get progressively more time consuming, but hopefully more fun (or at least more satisfying) at the same time. END_OF_DOCUMENT_TOKEN_TO_BE_REPLACED

The trip to Moscow that happened at the end of March (Diary #3) was originally meant to happen at the end of January, The last time I was in Moscow in January (many years ago) the outside temperature was -25 most of the time; whenever you stepped outside you could take a deep breath in through your nose and pinch your nostrils so you could hear your frozen nose-hair crackle. So this time, to protect my face a bit, I decided to grow a beard. I stopped shaving around the fourth of January (and of course didn’t record the exact date in my lovely, new, red leuchturm diary). My face got stubbly and then, one day when I looked in the mirror, I had a beard.

And then the trip got postponed. END_OF_DOCUMENT_TOKEN_TO_BE_REPLACED

Select the most interesting parts of the diary (which could also be the most banal or mundane) and interpret them into a photographic project.  You could present your chosen diary entries as a visual diary or use it as a springboard for further exploration. You may choose to insert the pictures like snapshots into your diary and hand it all in together. You don’t have restrict yourself to the diary itself; you may decide to use it to take you into new territory.

While I have posted here four sequences of diaristic photographs (and have another sequence that I picked up from Snappy Snaps on Byres Road as I passed through Glasgow on my way north to Orkney for my summer holiday – they will be added to this series of posts as a sort of coda I think) the set of images posted as “Assignment 3 – Life During Wartime” has grown out of various themes  that have become apparent to me as I have worked through the diary pieces.

END_OF_DOCUMENT_TOKEN_TO_BE_REPLACED

Keep a diary for a set period of time (at least two weeks). Each day write two or three pages about yourself – what you’ve been doing/thinking. This can be as specific or poetic as you wish. You may wish to pick a theme for the duration. This is an open brief designed to give you freedom to create something personal which suits you best. Use the artists you’ve looked at in Part Three or your own research for inspiration. Select the most interesting parts of the diary (which could also be the most banal or mundane) and interpret them into a photographic project. – C&N Coursebook (p.89)

Interspersed through this post there will be links to sections of photo diary, taken in emulation of Stephen Shore’s body of work, made in the early 70’s  and collected most recently as American Surfaces. They document the less typical parts of the first 4 months of 2016, at points when I have been preparing to travel or travelling, either for work, or to see my son who lives in Glasgow. Using American Surfaces as a template proved more difficult than you would think…

There are pictures contained within this that are conscious emulations of work by Walker Evans, Saul Leiter, Lee Friedlander and others, including of course, Shore himself…