In a minute there is time
For decisions and revisions which a minute will reverse.

For I have known them all already, known them all:
Have known the evenings, mornings, afternoons,
I have measured out my life with coffee spoons;
I know the voices dying with a dying fall
Beneath the music from a farther room.

From T.S. Eliot: The Love Song of J. Alfred Prufrock

Like a fool, I decided that – rather than halve the bulb of fennel – I’d take off the three slices needed to get it to fit into the guard of the mandolin holding it in my bare hand. How wrong can you be?

END_OF_DOCUMENT_TOKEN_TO_BE_REPLACED 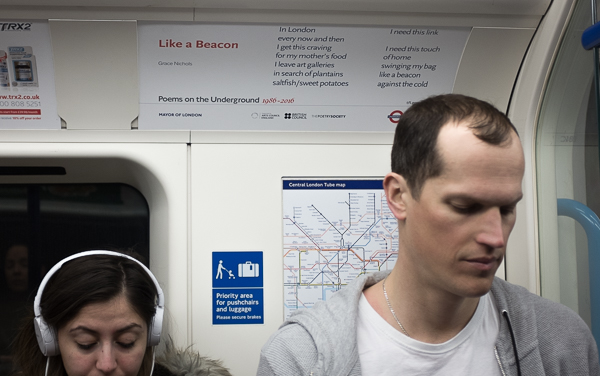 poems on the underground – after evans

“Choose a poem that resonates with you then interpret it through photographs. Don’t attempt to describe the poem but instead give a sense of the feeling of the poem and the essence it exudes.”

Later this year, we hope to move house. One of the things we need to do to turn this into a reality is to pack things away. I have way too many books, so they need to be boxed up and made ready bit by bit. As a result most of my poetry books – all of them. actually – are now in boxes in the the attic. This is quite good as it forces me to find some new poetry to look at, for this… END_OF_DOCUMENT_TOKEN_TO_BE_REPLACED

“The town of Kremmling Colorado, 115 miles west of Denver, contains 1,000 people. The surrounding area of some 400 square miles, filled with ranches which extend high into the Rocky Mountains, contains 1,000 more. These 2,000 souls are constantly falling ill, recovering or dying, having children, being kicked by horses and cutting themselves on broken bottles. A single country doctor, known in the profession as a “g.p.”, or general practitioner, takes care of them all. His name is Ernest Guy Ceriani.”

“Three months after my Dad died, I found myself hanging photos on a gallery wall that revealed the story of our relationship and of his death. We had recorded it together through photography and film during his last six months, and it became ‘The Dad Project’. He was 65, I was 29, and two years have passed since.”

In itself, the attribution to these two quotes identifies a number of significant differences between the two series’ of photographs considered here. Country Doctor exists in a single form contained in one edition of Life; The Dad Project has had many versions – a book, exhibitions, articles in the press (and a Guardian film) and the currently available online version that I will base the bulk of my comments in this post upon. Country Doctor – although the pictures are available with some outtakes on both the Life and Magnum sites – is a singular thing; The Dad Project is multiple. Country Doctor is a 3rd person narrative; The Dad Project is first person. END_OF_DOCUMENT_TOKEN_TO_BE_REPLACED