Three women, frozen in time, are looking out at me, doing… something. 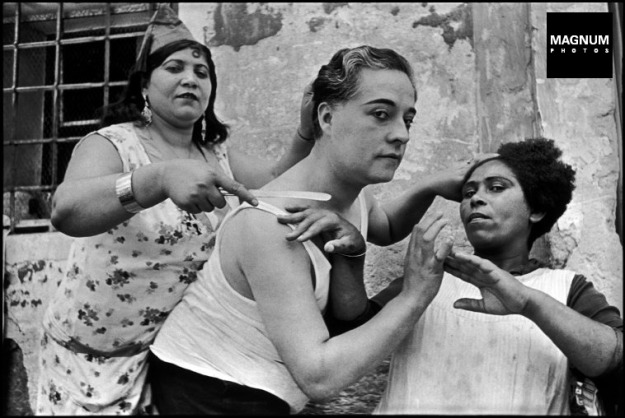 Each woman touches one of the others.  On the left –  wearing a pointy hat and a floral-patterned dress – a Mexican-looking woman has one hand on the back of the head of the woman next to her while her other hand stretches around her right shoulder holding – bang in the middle of the picture – a straight razor. On the right, a dark skinned – African? – woman leans back. Her hair is pushed from her temple by the central figure’s left hand. She raises her left hand defensively towards her face; its palm is either warding off a blow or trying to block the camera’s view. The fingertips of her other hand brush delicately over the strap of the slip crossing the central woman’s right shoulder. This figure leans in towards us wearing a marvellously neutral expression, emphasised by the light patch of out-of-focus plaster behind her and her head’s size within the frame.

I looked again and paused. Is the woman in the middle a man?  Her clothes are hard to read – is that slip actually a man’s vest? – the angle and the tangled arms mean you cannot see whether  she has breasts. Her face is quite masculine, and her eyebrows, while shaped, are thick. But the arms and face are hairless, too – the razor? Is it a woman being dressed up as a man?

My first thought had been of Matisse’s dancing maidens, but they dance in a ring, lost in their rite,unaware of being watched. Regardless of gender, these three are not maidens and make eye-contact through the camera, across time. Then, my mind glanced away to another Spanish scene and another razor, slicing across an eyeball at the start of the film, Un Chien Andalou (Buñuel & Dali) but it wasn’t the razor that kept me looking.

Of course, really I am standing in front of a black and white, sixteen by twelve inch, gelatin-silver print, placed by its label in space and time. Alicante, Valencia Province, Spain 1933 hangs in the Fine Art Society’s building, part of a 2016 exhibition of fifty prints made under the supervision of Henri Cartier-Bresson, for an American collector in the 1990s.

Later, I find out more about the picture (Cartier-Bresson, 1933a). It was taken well before Cartier-Bresson helped define post-war photojournalism, centralising his practice around the idea of “The Decisive Moment” – that a picture could be organised around a single point in time when all the static and dynamic elements contained in it come together in satisfying harmony. In 1933 he was simply the dilettante son of a prosperous French family, travelling with a small, unobtrusive camera, finding out what he could do with it.

Earlier still, he had spent time in Paris, hanging out with the Surrealists and studying painting (Chéroux, pp.15-18). From his studies he had absorbed rigorous ideas about geometry in composition and from Surrealism the idea that the intrusion of the random (something in the wrong environment; the subconscious bubbling up into dreams; an everyday object treated with surprising veneration) could transform reality into something considerably more charged.

Cartier-Bresson had already created at least one of the images used to define The Decisive Moment (fig. 2: Cartier-Bresson, 1932), but the picture I am considering is quite different. It will not be included in the 1952 book; the background does not appear carefully chosen. The camera is not static, but instead tracks with (not quite containing) the lurching movement of the three figures from left to right. And there is obvious collusion between the photographer and the subjects. Indeed, on Magnum’s website, there is even another photograph of two of them in front of the same wall.

And there is obvious collusion between the photographer and the subjects. Indeed, there is even another taken of two of them in front of the same wall, available on Magnum’s website. 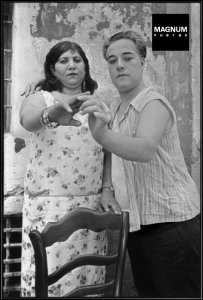 This second picture (Cartier-Bresson, 1933b) lends support to the idea that the central figure is male: Vest? Yes!  And trousers… The keywords associated on Magnum’s site with both pictures seem to deliver a definitive judgement:  “Man – 25-45 years”; “Woman – 25-45 years”; “Homosexual”; “Prostitute”. “Mischievousness” – another keyword – suggests the spirit in which Cartier-Bresson and his accomplices set about making the picture.

But, having to some extent cleared up its mysteries, I was still left with something more than the record of Cartier-Bresson having some fun making a picture with people he’d stumbled across. The question remained why it still had power?

Maybe it is because I’m looking up from below the women’s eyeline and three pairs of eyes stare down at me.  All three expressions are flat, knowing, unreadable. In Rhetoric of the Image, Barthes (1964 p.44) had already highlighted the disjunction between a ‘present’ pictured in a photograph and the viewer’s present, before, in Camera Lucida (1981 pp 111-113), he considered whether a direct address to the camera  – the subject staring out, making eye contact with the viewer –  can fulfill the role of punctum – a subjective link with something in a particular photograph  – across the time that has elasped since the picture was taken. He concludes yes, and I agree. Here lies Valencia’s power.

Having reached a peak of influence and regard in the fifties and sixties, Cartier-Bresson has since fallen from critical grace. While “the decisive moment” still has a hold on the popular imagination (something bemoaned by Sean O’Hagen, in his review (The Guardian, 2014) of the book’s reissue, for maintaining a photographic world where “colour and conceptualism may as well not have happened”) his exemplary place has been captured by artists following a line drawn from Robert Frank in the fifties through Stephen Shore and William Eggleston in the seventies to Paul Graham today.

Cartier-Bresson’s pre-WW2 work sits more comfortably with this trend for less prefectly poised pictures which are more obviously engaged with their subject matter. This picture, Valencia 1933, has retained a contemporaneity that Cartier-Bresson’s later pictures  have lost.

If I had the money, this is the picture I would buy from the exhibition. I like it a lot and, at eight thousand pounds, it is cheaper than most. It would not hang in my living room acting as a token of value and of my good taste; that would cauterise its mystery. Rather, I would tuck it away around a corner – on the way to the bathroom, perhaps – where visitors, like the viewer inferred by the picture, could stumble across this ambivalent scene, stare a moment and wonder what it was that they had just seen and just why it left them feeling unsettled…