“In our earliest years we know a patch of ground in a detail we will never know anywhere again – site of discovery and putting names to things – people and places – working with difference and similitude – favourite places, places to avoid – neighbours and their habits, gestures and stories – textures, smells – also of play, imagination, experiment – finding the best location for doing things – creating worlds under our own control, fantasy landscapes.”

“Photographers and artists have always found inspiration in their immediate location. There is a concept within Welsh culture called Y Filltir Sgwar (The Square Mile), described above by Professor Mike Pearson. It is the intimate connection between people and their childhood ‘home’ surroundings.

Make a series of 6–12 photographs in response to this concept. Use this as an opportunity to take a fresh and experimental look at your surroundings. You may wish to re-trace places you know very well, examining how they might have changed; or, particularly if you’re in a new environment, you may wish to use photography to explore your new surroundings and meet some of the people around you.” 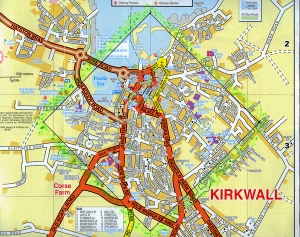 In 1983, between my first and second years at Glasgow University, I spent the summer back home in Kirkwall. Nothing much seemed to have changed; nor did it seem likely to change at any point in the foreseeable future. Glasgow, on the other hand, already seemed to be in a permanent state of flux. Almost the first thing I noticed when I returned in the autumn was that the derelict facade of the Grosvenor Cinema on Byres Road had been pulled down and rebuilt.

A simple opposition was established: Orkney- rural, eternal and unchanging, a little bit dull; the city – mercurial, fluid, exciting. My idea of a romantic landscape leant more towards a neon sign reflected in a puddle than some blasted heath or a Turner-esque storm at sea. If anyone asked me whether I missed Orkney, I would answer that it was still there, to be visited any time I wanted.

I visited pretty much every year, at first at Christmas and then – after the birth of my son – in the summer, when going to a beach was fun rather than blowy. At some point I realised that not every settlement of 5000 people had an eleventh century cathedral in its middle. Gradually I became aware that some views (or rather skylines, like the one you caught sight of as you rounded Wideford Hill on the way out to Finstown) were etched somewhere deeper in my skull than simple memory. Cathedrals are aligned with the points of the compass and, wherever you stand to get a wide view of the town, you can see the cathedral with its tower sticking up above the lower buildings that surround it.

And  – while at some level I denied it –  I became aware that Kirkwall was changing after all. The cathedral spire was no longer green; its verdigris-ed copper coating had been replaced with new. And more and more.

In August 2014, I had walked round Kirkwall Grammar School, peering into the classrooms showing James the places where I had been taught German, Maths, History. Off to the west, where the pitches (nothing so grand as playing fields at KGS) had been, another new school was being built. In 2015, I retraced my route and realised that my school had been razed as thoroughly as Carthage by the Romans. Salt hadn’t been ploughed into my memories to stop crops growing, but only just…

The next summer, after this had sunk in, I started nipping out on a bike on brief, targeted missions to take pictures of places where significant buildings had stood.

The wartime hut where my band had rehearsed every Wednesday evenings and Saturday afternoon; Kirkwall Grammar School; the view from my front door, no longer blocked by a sycamore we had planted; the swings where I went up to the jerks ; the cinema where I had watched  Bond and 633 Squadron, Chariots of Fire, Scum and Quadrophenia, The French Lieutenant’s Woman and Dirty Dancing; the shop where I bought my first electric guitar; the woodyard where mum had bought timber to build me a  bed; the gasworks, which stank to high heaven….

i showed the pictures to a couple of my contemporaries who still lived in Kirkwall. They knew what they were photos of. My childhood still had not been erased…