‘In response to Sander’s work, try to create a photographic portraiture typology which attempts to bring together a collection of types. Think carefully about how you wish to classify these images; don’t make the series too literal and obvious.’ 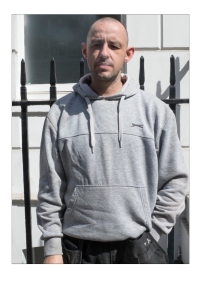 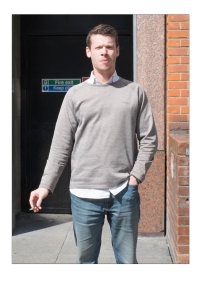 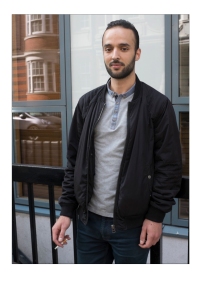 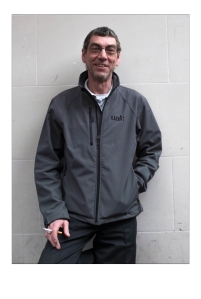 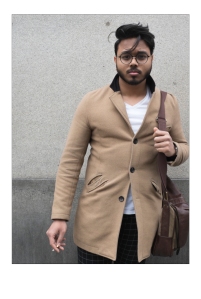 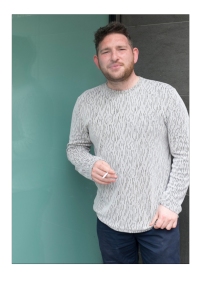 I said this, or some version of this more than a hundred times over the course of six or so lunchtimes back in April. Around forty people said yes and I ended up with around seventy-five pictures (usually two of each smoker: one of them with a cigarette near or in their mouth; the other with the cigarette well out of the way of their face) that I was happy enough with for them to go through to the next stage of the edit.

Early on I had made a series of conscious decisions about what I was doing here. The people had to smoking ‘real’ cigarettes; there would be no vaping. Regardless of whether the people were on their own or with someone else, only one person would be in each picture. The pictures would also – in preparation for assignment 1 – be consensual; I needed to ask everyone’s permission before I started taking pictures. I would limit my direction of the smokers to saying something along the lines of “Just carry on smoking” if they asked what they should do; I did not mind if they looked at the camera or not. I had no preference over whether they smiled, despite knowing of Grayson Perry’s semi-serious, photographic dictum from the second of his series of Reith Lectures (Perry, p.64): “If they’re smiling, it’s probably not art”.

My intended end result was determined more by Bernd and Hilla Becher’s grids of industrial buildings rather than Sander’s sequential organisation into a book. In keeping with both the Bechers and Sander and their use of a large format camera to take their typographic pictures I wanted to crop the pictures down to a 4:5 ratio in portrait format; that cropped frame would need to produce a three-quarter length portrait. I intended to keep to that ratio of 4:5 for my grid as well: I set out to take enough pictures to produce twenty final images. Optimistically, I thought taking pictures of twice that many people would give me enough to produce a consistent final grouping.

I tried taking close-ups of some of my earlier subjects but this lent itself more to a landscape frame and was also –  I was using a camera with a fixed 35mm lens – much more intrusive, leading to much more self-conscious pictures. Once I took a step or so back, the pictures became ‘cooler’ and more observational, less about my relationship with the subject. Any awkwardness on the smokers part seemed more to do with their relationship with smoking rather than with having their picture taken.

The smokers’ reaction to my request to take their picture was interesting. Of the 60% who said no, about half of them said they did not like having their picture taken, and the other half had issues with having their picture taken smoking, as the assumption was that either their boss – if they were outside their place of work –  or their family – parents or partner or kids even – would come across the pictures online and would then know something which they currently did not. It’s quite flattering for people to expect that my blog is popular enough for their manager or their spouse to look at, even by accident, but I don’t think its going to happen somehow; presumably they didn’t want something that was theirs, was their own private rebellion, out there in any way. If I approached two people smoking together, there was only one instance when one would say yes and the other no.

Still on the subject of refusals, more women than men said no, too. I wonder if I had been a woman taking the same pictures if some of them at least would have said yes, feeling more certain of Simone’s project not being a cover for taking fetishistic pictures of women, smoking than they were of Simon’s. Similarly the greater the seeming disparity in social status between us, the less likely people were to say yes, regardless of gender: more shop-workers refused while office workers tended to say yes. Disparities in age did not seem to have any effect though.

Of the people who said yes on the other hand, most had no real interest in what I was doing beyond the fact that I was doing it. They would ask what I wanted them to do, and when I said they should just carry on smoking, that’s what they did. Some found the idea of what I was doing amusing; one woman said that I could go ahead, but she ‘didn’t want to look at my camera’. A few were interested in what I was doing, and who I was doing it for. Some people volunteered that they were also photographers or had studied art somewhere. If they were smoking in front of an obvious no smoking sign, once people had agreed, this became funny, in an ‘ooh – naughty me!’ – way rather than something to cover up.

No one asked where they could see the resulting pictures, but one person – a French tourist who had just arrived in London – did ask me to take a picture of them with their phone after I had taken mine.

No one asked to take a picture of me in return.

When it came to editing my 70 possibles down to a final twenty, I started by eliminating the alternative poses of the same people, ending with photographs of forty-one individuals. Then evening up the exposure of them, I printed them all out on 6×4 paper (ie the 4:5 photograph with a white border) using the instant printing service at Boots. Back home, I laid the prints out on the floor and started to narrow them down further, by eliminating the ones that were least consistent in terms of framing or pose. Then thinking about the ‘literal and obvious’ I removed all the pictures where the cigarette was either in or near the subjects mouth; I got rid of all the ones where people were looking down at screens too. By this time it was becoming hard to come up with twenty that worked together, but there were fourteen – almost enough to do a 5 x 3 grid of people with one arm straight down by their side. I put back one of the first pictures I took where the cigarette was more obviously up by the subject’s face and started thinking about which picture should go next to which.

I blu-tacked the 15 prints to the wall and moved them about, swapping them around to get an interesting flow of eyelines. When I thought I had a good enough order I went away and had a cup of coffee (but not a cigarette – I gave that up nearly 12 years ago, now). When I came back i made a last couple of picture swaps and then uploaded them to wordpress and made the gallery at the top of this post. Done.

And I realised, far too late, that I really should have spoken to my subjects more and found out why they were in the place they were rather than retreat behind my camera, relieved after forcing myself to speak to another stranger. I have had to resort to differentiating one smoker from another by their location here and the location, if you know London, will tell you quite a lot about the people you might find there (the left-handed woman in Gate St is just round the corner from Lincoln’s Inn Fields – she could well be something to do with one of the legal firms who have their office there, for example) and then you can start to unpack the message given about who they are by their clothes…

But it would be better to be able to classify them more precisely as ‘Tourist’ or ‘Journalist’ or ‘Accountant’ or ‘Shop Assistant’ or ‘Shopper’ or whatever. This would, I think, have allowed for a more Sander-like division of them into types, linked by their smoking outside a building.

While working through this exercise, I started to think about the way that not all the people you see standing outside buildings in central London are smoking any more – plenty of them are looking at something online on their phones, as presumably their employers feel that – just as smoking in the workplace is bad for you and your colleagues (and of course illegal) – phone use is bad for productivity. Phone breaks appear to be becoming as much a part of people’s working day as nipping out for a smoke used to be. So there’s a second typology – people looking at screens outside buildings – right away, and of course the possibility of some Venn-diagram type structure with an overlapping grouping of people looking at screens while they smoke outside buildings.

As I came up with more and more categories of activities that people do outside buildings, I began to get some idea of how appealing it is to let something snowball way beyond its humble starting point. You could add a grid of people talking to colleagues outside the place that they work. or people waiting for someone outside a tube station and on and on. Certainly, I could just go out and try and get another five smokers, not looking at the camera and with their smoking arm straight down by their side; I could try and get more women or either more left-handed people (there are two, maybe three, in my grid, above) or to make sure that I have enough right-handed people to have on big grid of the dextrous and another, smaller, grid of people smoking sinisterly outside buildings…

I began to get some idea of how you could become August Sander, spending decades on an unfinished big, all-inclusive project or even turn into a latter-day W. Eugene Smith in Pittsburgh, trying to photograph everybody and everything and never, ever being ready to draw a line under a work and to be done.

There is something of the lepidopterist in making comparative studies of people or things. There is always one last item that you need to catch to be complete. I am probably happier with typographies of the inanimate, than I am with ones of people, really, so – as a side project, I made a second – shorter – series of pictures of the places where people had been smoking, after they had stubbed out their cigarette and gone back inside.