Closely consider the work of the practitioners discussed above [Walker Evans, Lukas Kuzma, Martin Parr, discussed here, and James Wood who I feel fits better in with section 3] then try to shoot a series of five portraits of subjects who are unaware of the fact they are being photographed. The reflection about your methodology will be as important as the final five images, so be prepared to write about how you found the experience (around 500 words) and present your findings via your learning log or blog.

For the exercise on reportage in Context and Narrative, I took two series of quite traditional street photographs. Now I wanted something less Gary Winogrand and more Phillip-Lorca diCorcia; something pulled back, something more truly covert. 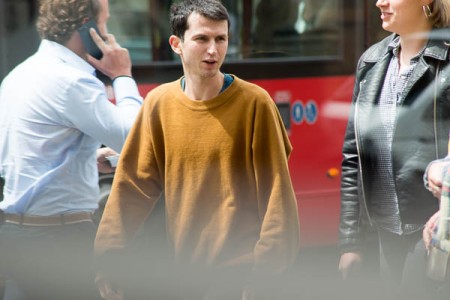 I like Walker Evans’ subway pictures, but this time, I took as my starting place a different set of pictures by him – the eleven anonymous portraits of workers leaving a factory in Detroit, published in Fortune magazine in 1946 as ‘Labor Anonymous’.

The 150 pictures taken for that assignment caught their subject moving obliquely across Evans’ field of view from right to left. The camera Evan’s used was held at waist height and the pictures were cropped down into a regular composition before they were published. 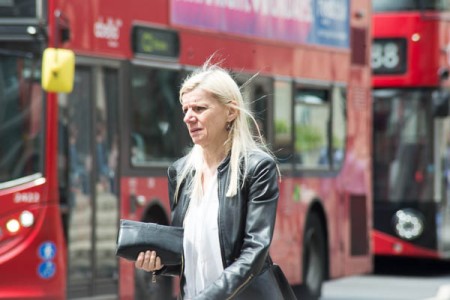 Near my place of work, there’s a restaurant on a corner with floor to ceiling plate glass windows. If you sit in one of the window seats that looks out over the road outside, you can spend your meal watching the flow of people who cross, heading towards the underground station a few blocks further down. While you seem to be fairly brightly lit as you sit at your table by the window, it is virtually impossible to see into the restaurant from the outside. It is a perfect spot for some unobserved people watching.

So, one Friday lunchtime I sat down, ordered some food and a glass of wine and spent the next hour looking out and clicking away with my longest lens (a 70-300mm zoom) as people passed in the road outside and as I worked through my pizza. 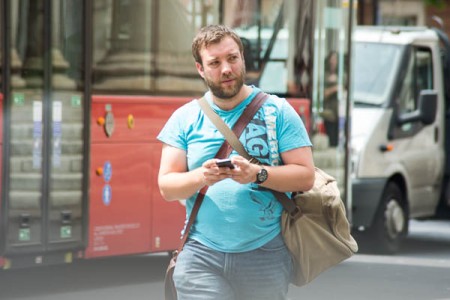 I had fixed the aperture at f8, giving a relatively shallow depth of focus and depending on the changing light outside shot at a shutter speed varying from 1/160th to 1/250th of a second. This was sufficient to freeze my subjects, as I braced my elbows on the table in front of me.

Some  – of the passing people were tourists while others work in the area. All of them seemed to pay little attention to anything other than where they are going next (and not being knocked down as they cross the road). Although there are so many of them, they generally seemed alone; couples sometimes engaged with one another, but mostly they too were lost in their own thoughts. Everyone was going somewhere else,  in transit, passing through.

And whatever these people were doing, it was not being being photographed… 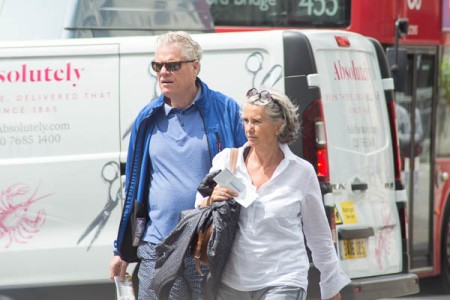 As I got better at picking out people and tracking them with the lens, I moved on to isolating individual figures, ideally with a firmly geometric background of traffic. I started to look for people carrying out specific actions such as talking on their phone (a lot of people were doing that) or with matched facial expressions. I began to realise how few people smile as they go about their day-to-day activities, and how few people seem to be getting good news as they talk on the phone. I was beginning to assemble another typography, but this time without my subjects knowing. 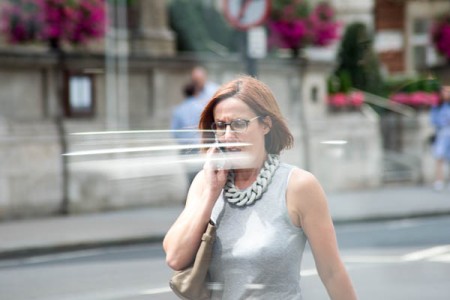 Later, I was able to look at the pictures properly.  I noticed that many of them had mysterious light artefacts caused by reflections on the glass, presumably caused by passing traffic (fig.5). Others had partial vignetting caused by writing printed on the window itself (fig. 1 & 3). I rather liked the effect as it added a further (literal) layer of distance between me and my subjects. Someone looking at the photographs would be guided into identifying with me, looking at the passing people at the same time as they were recognising things in the people’s expressions, dress and actions. The refection also often had the happy effect of emphasising the people movement, or even adding a further anonymising effect if – as in fig.5 – they partially obscured a face.

If I was to take another set of pictures in similar circumstance, I would try to identify what caused these flashes of light and then harness it as part of my picture-taking.

And of course, I am now even more aware than I was before that  – when you have little control over what you are photographing, you need to kiss an awful lot of photographic frogs before they start coming up princes: 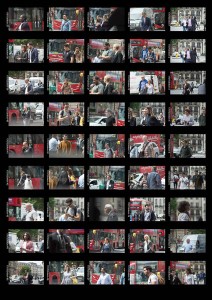 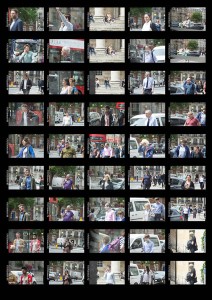 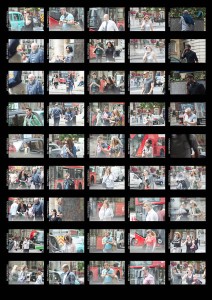 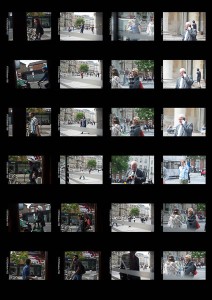