Two of the photographers we are pointed towards during this project seemed to have sufficient similarities in approach to be considered together, here. Julian Germain’s For Every Minute You Are Angry You Lose A Minute of Happiness (2005, but taken between 1992 and 2000) and Harry Callahan’s pictures of his wife Eleanor and his daughter Barbara, tiny among the geometry and space of Chicago (taken on outings between 1952 and 1954) both were made without any seeming expectation of their becoming a finished body of work. Both series were made under ‘real’ conditions but – and presumably this is why they are here in the ‘aware/studio’ half of the chapter – using heavier, larger format equipment than the lightweight cameras used by Evans or Kuzma or Parr in the ‘unaware/street’ half. 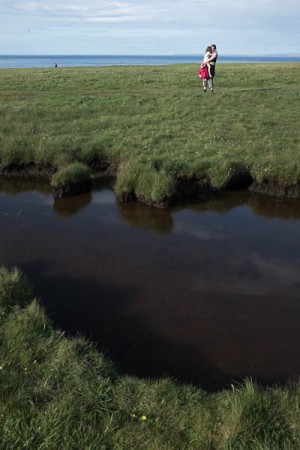 I first came across Harry Callahan at Tate Modern three years ago, when I arrived a few days too late to see a small side show of Eggleston’s prints and found instead four rooms of pictures by Callahan. I felt an immediate affinity  for his work (in particular, the pictures he had taken in various places of whorls of long grass reminded me of pictures I had taken in Orkney over the years) and bought a book of pictures by him at the gallery shop on the way out.

In the book were four of these double portraits in space, taken in the early 50’s and an essay on Callahan’s pictures of his wife by Julian Cox. Cox (pp.49-50) describes the pictures as: “‘Among the most important groups of pictures that Callahan made of Eleanor (and Barbara) are the “formal” snapshots of them on family outings in and around Chicago. […] The photographs he produced show mother and daughter as the trusted center of his universe regardless of where they happen to be. Stripped of narrative insistence, time seems suspended in these pictures as the subjects are transported into locations where they appear ironically as being both central to the picture and surplus to its requirements. No matter how small they are, they dominate our perception.’

On the other hand, Germain and his pictures that make up For every minute you are angry you lose sixty seconds of happiness (2005) were new to me. I liked the pictures but was especially taken with the way both the book and the exhibitions involving the photographs juxtaposed Germain’s pictures with photographs of pages from Charles Snelling’s own  album with its pictures of his wife Lucy and holidays and all the other things that make up the stuff of photographic memories.

fig.2 – Alice in the living room, eating her tea

The interior pictures use available light (and corresponding areas of relative darkness) very well indeed. Light from windows makes people think of Vermeer. Printed large (and the installation views of the 2005 exhibition at the Baltic Centre in Gateshead show this clearly) the pictures give stature to their everyday subject matter.

A snapshot (albeit one taken on an awkward manual camera) ceases to be snapshot and becomes art. Especially when it is then exhibited on a gallery wall. At different times, Germain refers to his subject as either ‘Charlie’ (in the Guardian) or ‘Charles Albert Lucien Snelling’ (in the artist’s statement on his site); the scale of the exhibited project achieves a similar change of portrayal, the everyday, the vernacular transformed into grandeur, into Art.

Like Callahan’s pictures of his wife and daughter, Gemain’s grow out of a long term relationship with their subject. Indeed he comments that there were times when he would visit (and Snelling and Germain live a long way apart) and not take any pictures. Instead they just drank tea and ate cake. There may even have been Sundays when Callahan just went for a walk with his wife and daughter.

fig.3 – Alice, on the couch, playing with a ball

I try to imagine Callahan setting up his gear during a Sunday stroll with his wife and daughter; what were they doing while he tweaked the geometry of his lens with his head buried beneath a black cloth – would an examination of the locations reveal a handy playpark nearby each of them? Germain’s equipment is easier to use, and most of his pictures are taken in Charlie, his subject’s house, but nonetheless his pictures are not snapshots; rather they are obviously planned and set up.

For example, the fourteenth photograph from the series on the artist’s site has Charlie reflected in a thin, elliptical mirror, next to a much smaller, framed picture of his late wife. His sightline shows him gazing at the picture, his face just lit by light from the window which makes a great rectangular splodge of brightness on the wall between the mirror and the picture. Another photograph just pokes into the bottom right of the frame. As well as being a picture about memory and photography and about looking, it is a picture of shapes – the elliptical mirror, the oblong photograph the square pool of light and the pattern of the wall paper. It is not something that just ‘happened’…

Both Callahan and Germain are working on location but with equipment more associated with a studio setup. Both of them have involved the people they are photographing in the creation of the pictures. They have built their series from time spent together and shared experiences. They both have a lot to say about photography itself, as well as the things they photograph, Germain through his inclusion of Harry’s memories in the form of pages from his photo albums and Callahan through the stark modernist flatness of his views of people in a landscape.  Both have made work as part of their relationship with their subjects.

As I sat down to write this post, I looked back at my own work and realised that for at least eight years now, the vast majority of my pictures have been taken with one of two small cameras both with a fixed 35mm lens (an Olympus XA or the Fujifilm X100-s I have used for the bulk of my OCA exercise work). Both are easily pocketable and quick to use. Neither lends itself to a slower, more contemplative way of working. I should use my DSLR more, or maybe a better way to look at it would be to think of there being specific times when i take photographs of my family and friends. I should take pictures in concentrated bursts, rather than letting them accrue through a steady drip drip drip of snaps…

A post-script: these pictures are not in any way easy to take, even with a light easy-to-operate camera. This Southend picture (fig.4) was taken during a bank holiday trip to the seaside on Monday.  The geometry is fine; Fiona and Alice are suitably neutral; but, as I squinted through the tiny viewfinder into the glare of the cloudless day, I completely missed the man by the breakwater vanishing behind Fiona. I could clone him out, I suppose, but instead I’ll leave him as reminder that nothing worth doing is ever that simple…