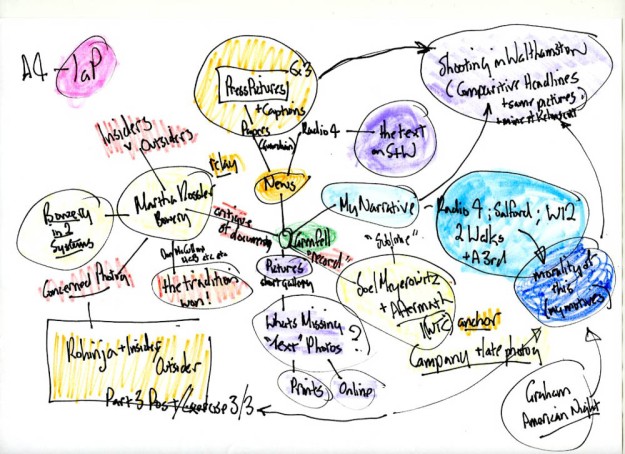 I probably woke up at about 7 am on the morning of June 14th 2017; certainly I was listening to the radio (Today on Radio 4) by 8. Gradually, I became aware that something was going on with a fire in a tower block in west London. I remember this.

I remember an interview with someone who had got out of the tower but remained at the scene. He described how residents had been told that if there was a fire, they should remain in their flats as their doors would keep a fire outside for the hour it would take fire fighters to get to them. The man being interviewed had ignored this advice and – as a result – had not been trapped inside. He described people who had stayed and waited shouting out of their windows. Today moved on to other things – Brexit, sport – but kept coming back to live reports and interviews from the fire. After the programme finished at 9, the fire remained the main item in the hourly news bulletins. It was obvious that something very bad had happened – was still happening – in west London.

On the fourteenth of June I didn’t go into my new workplace – on Monday 12th I had started a new job (for the same employer) and moved buildings from central London to Wood Lane further west along the central line – because I was catching a train up to Manchester to attend a conference for all the people associated with my new department. I carried on listening to the radio and did working-at-home-type work and then got the tube to Euston and headed north. It was only when I got back to London that I realised how close to the scene of the fire my new workplace was, but once I’d spotted it on the other side of the tube line to the East of Wood Lane and so, there, in front of me as I left work each day, it was impossible to ignore.

A week after the fire, I took this:

At the time, I wasn’t precisely sure why I took it  – I remember thinking that it looks just the same as it does in pictures so, really, what’s the point? – but somehow it seemed a necessary thing to do. Time passed.

And then, another day – a Monday in November – when I was working at home again. Start the Week was on, on Radio 4.  Darren McGarvey (aka Loki) – described as a ‘writer, rapper and hip-hop recording-artist’ – caught my attention as he spoke about his first journey to the West End of Glasgow, emerging from the subway at Hillhead and thinking ‘this is how people dress when they’re not afraid to be stabbed’. I could also have been one of those unafraid people, and I listened on, thinking it would be useful for the insider/outsider stuff I was thinking about for part 3. McGarvey was interesting and – like almost everyone on programmes like this he had a book out. I  looked the book up on Amazon and saw it had a ‘read inside’ tab; I clicked on the tab and almost immediately came across this quote in the introduction:

The materials proposed will provide the building with a fresh appearance that will not be harmful to the area or views around it. Due to its height the tower is visible from the adjacent Avondale Conservation Area to the south and the Ladbroke Conservation Area to the east, The changes to the existing tower will improve its appearance especially when viewed from the surrounding area. Therefore views into and out of the conservation areas will be improved by the proposals.

Planning Application, 2014, for the refurbishment of Grenfell Tower, London

Instantly I associated this with my view as I left work in the evening. Almost instantly. I realised that this provided something that I could hang the Words and Pictures assignment on: the gulf between this single stated aim of cladding Grenfell and the actual outcome was immense. I found the two conservation areas on a map and worked out (height tables to work out where the tower would definitely be visible over intervening buildings; a ruler to find likely direct lines of sight) where you would have a view from the surrounding areas. In January I made the first of four walks around the area of the tower; in March I made a second, walking from Ladbroke Grove down towards the tower through Avondale. And then finally, I did brief detours to the north of the tower and to the south in Holland park.

I had the pictures I needed and the words to go with them. It had not been hard to work out what to shoot (and the points where you could see the tower were not that plentiful) and I had a few ideas how to combine them with text, but it never does any harm to contextualise a bit. I decided to look again at two bodies of work (and some of the critical work around them) that could help shape my final presentation of the project: Joel Meyerowitz’s photographs of the clear up of Ground Zero in New York and the earlier (and much more interestingly radical) series of pictures of the Bowery taken by Martha Rosler in the seventies.

Taking the pictures had been easy; working out why I had taken them and what their impact might mean morally and politically might be harder to achieve.  I tried to consolidate all the strands that might feed into the assignment into a mind map (at the top of this post) and set to work re-reading David Campany’s 2003 essay on Late Photography…

1 thought on “assignment 4 – words and pictures”