1: Demonstration of technical and visual skills

I am happy with the pictures I have made for this assignment. There is a roughness about them  – they are not overly aestheticised; the tower tends to be in an awkwardly central, high point in the pictures; the edges of the frame are quite rough, often with ‘stuff’ intruding – and no there is no attempt to overpower the emotions of the viewer. Shot with a long lens (and sometimes cropped to exaggerate this) they are distanced from their subject as I am; they are about the relationship between the things they portray rather than about me and what I feel.

The photographs of the texts have all been created in photoshop: composites of scanned text and a photograph of an A6 record card for the planning quotes and a complete rearrangement of a sentence from the Gary Younge article in the Guardian to isolate the relevant words while still indicating their source.  I think it is interesting that – when looking for something that reads as ‘official’ – I still reach for a typewriter font (Courier) and lined record cards. Possibly a look closer to that of a screenshot would have been better.

I did experiment with some other post-production treatments of my west London pictures. Following on from my third assignment examination of Paul Graham’s recent work  I tried out the heavily over-exposed look he used in the first of his America shot bodies of work – American Night –  trying to find in almost totally white photographs a visual expression of people not wanting to look or to see the squalor and poverty in parts of US society, It was an interesting experiment in trying to make Grenfell Tower disappear even further into the haze above London (and to accentuate the plastic shroud that was being erected as I made my photographic expeditions into Notting Hill, but they added nothing to my project overall. 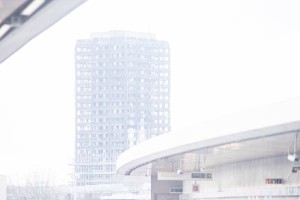 I also could have made more explicit links back to Rosler’s Bowery pictures: I could have converted the West London pictures back to black and white; I could have created a fake 35mm frame border and superimposed it on all the pictures. I did not, because that would have shifted the balance of the piece away from being about something that has happened and towards being a photographic piece about photography.

I think the 13 pictures (and one black space for punctuation) work well as a sequence. The texts and the related views develop and take on complexity as you work through them.

I have resisted any impulses to try and make this a more complex work – the temptation is always there to add more and more elements – estate agents’ notices for properties in the area; maps;  other commentaries from the papers; other words; this would only have the effect of diluting the sequence’s impact without adding any greater understanding.

I have tried it out on a number of people without giving them guidance as to what it is that they’re going to see; as a narrative it takes them through a simple sequence with them taking from it something of my desired meaning while leaving them space to interpret it themselves.

Quakerism (I’m not a Quaker, but never mind that here) includes the concept of being ‘moved to speak.’ This is a useful way to describe how I felt when I stumbled across the words that punctuate this short body of work – they pretty much instantly gave focus and a viewpoint onto something that I was already photographing but without really understanding why until that point.

As such it is fairly atypical of both my work and my normal subject matter; it is neither oblique in its politics nor concerned particularly with my own self-expression. However, I don’t think it is the start of my embracing some sort of neo-social documentary approach, but it has allowed me to make work that is definitely not about me. While I cannot rely on being sufficiently moved to make this a prerequisite of my engagement with a subject for other assignments going forward,  it is interesting to see that I can adopt a different and I hope quite powerful stance towards the world around me when the subject matter demands it.

For me, the most interesting thing about the journey I’ve made through this section of the course is just how applicable Martha Rosler’s critique of documentary photography is to images being made now, neatly bypassing the whole development of ‘art photography’ as a galley and auction house phenomenon over the last forty-odd years. Post Modernism may have led to a large number of highly enjoyable art works, but there are times (and subjects) which are not suited to a puckish high-concept approach. Rosler nailed this (and also the tendency of galleries to turn concerned works of the past into art objects) in the early eighties, before Post Modernism won and subjectivity ate everything.

While she did not set out anything approaching a manifesto for a politically committed documentary or even a set of techniques that might be used to develop one, she did provide a model for me to use to examine the relationship between words and pictures, intentions and deeds.

The natural home of documentary photography is not the gallery wall, or displayed boastfully on the walls of big corporations. I have already reflected that Grenfell Tower should not be used as a backdrop for selfies, or as subject matter that says more about the photographer than the thing in front of the camera. Perhaps I should also have stated that pictures of Grenfell probably shouldn’t be made into a limited edition run of enormous prints, designed as investments. Although of course, despite its 1974 premise and her later commentary upon it,  a vintage set of the pictures that make up Rosler’s Bowery would presumably be shockingly expensive if it was auctioned today, regardless of the motivation behind it…