fig.1 – a pair of converse; a couple of summers

Create a set of still-life pictures showing traces of life without using people.

You could do this with your camera phone to reflect the vernacular and transient nature of these moments or you could choose to use high-quality imagery to give these moments gravitas, like Nigel Shafran. Your technical decisions should back up your ideas, so write a short reflective commentary detailing these decisions and the reasons for them.

For most of the time I’ve been working my way through this module, I’ve have also been in the process of selling my house and buying another with my partner. Last month, after various false starts, all the process turned into reality and we actually moved. I had lived there for nearly ten years and it had been home to Fiona and our daughter Alice for the last five. It’s amazing how much crap you can amass in that time…

I didn’t want to move a load of junk from one house to another, but I didn’t want just to bin it before the move either. I set up a simple plain backdrop (a roll of paper) and lit it with a diffused strobe in my attic workroom. I used this to take photographs of a lot of the things that had been put aside for one reason or another and then even managed to bin some of them. The pair of shoes at the top of this post are one example.

Then,while a lot of the stuff that had built up in corners or on top of wardrobes or in the attic had no real structure to it, other areas had been put together in a considered way. There was the shelf at the top of the stairs up from the front door, the pin board covered in local announcements and post cards sent by friends, the magnets commemorating journeys stuck to the fridge, the galleries of pictures on Alice’s bedroom walls and there was the living room mantelpiece. I wanted to record these carefully, as they had a lot of potential to describe who we were and what we had done while we lived in the house. The living room mantelpiece had the best mix of all of us, so it is the one I include here.

This is the mark two (or maybe even three) mantelpiece – I had cleared it before using it as a stage upon which to construct a still life for an early Art of Photography Exercise four years ago and since then the objects on it have shifted and grown in number. I’d tied in the exercise to Mass Observation’s 1937 directive to new observers: REPORT ON MANTLEPIECES which used the objects found on mantelpieces (the idea was you would do your own and then repeat the task with other people’s) as a way to describe the people who lived in a house – picking up on the surrealists’ interest in objets trouve and tying in intriguingly with the idea examined in my previous post of using objects as metaphor. It ended with an exhortion to ‘If possible, also take photographs of mantlepieces.’ So I did.

I wanted the resulting photograph to be detailed and able to be printed pretty much life size. I put my DSLR on a tripod, aligned for a portrait. I fitted my shift lens (which – as well as allowing in camera perspective correction when you’re photographing buildings – allows the lens to be moved to make stitched together panoramas without moving the camera itself. I set up a pair of speed-lights on either side of the mantlepiece, angled fairly flatly along the chimney breast and firing through umbrellas to diffuse the light a bit. I stopped well down to increase the depth of focus and upped the stobes’ output accordingly.

The final, landscape panorama was stitched together from three images in lightroom – one with the lens centred and one each with the lens shifted to the left and the right. You can clearly make out objects and associate them with one or two or all of us. Our new house has no mantlepiece; perhaps this picture could be printed and hung on the wall where one once would have been. Perhaps though, we may just let  a new set of expressions of who we are build up and keep this (and the other photos from Hibbert Road) as a record of what was.

2: Wherever I Lay My Laptop

My main place of work is a ‘hot desk environment’ – when you go home at the end of the day. you are supposed to leave the desk you worked at cleared of all evidence of your having been there, ready for someone else to sit there tomorrow (or later in the day, if people work shifts). I  spend a day a week working at home and when I am visiting my son in Glasgow, that home may not be mine. Sometimes I visit other parts of the UK and work at our offices there; I try to work on trains, or in hotel rooms. As well as my laptop, there is other stuff that is constant: I drink a lot of tea and coffee; there are notebooks containing relevant (and irrelevant) information; if I am not in a  conventional office, I need the single-use code generator that lives with my keys to connect to central servers over the internet. Where these sit in relation to the laptop changes from place to place as I build my working environment each day… 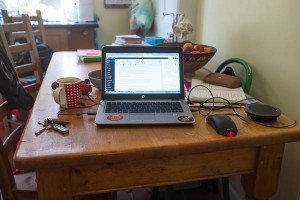 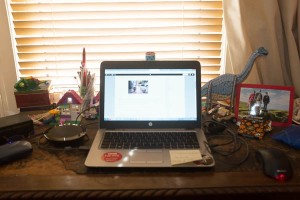 I could do more of these – there is not a picture made at the new house yet, and there are other premises, in other cities where I sometimes find myself working – but this selection gives an idea of something – my laptop and my view of it – remaining constant while the things around it change. It might be too grand to describe my daily construction of somewhere to work as making a daily sculpture, but there is certain degree of ritual to it and – if someone – an observer – looked at what I was doing, there could be seen to be an element of performance in this. These photographs,  taken with my ‘notebook’ camera – a fujifilm X100s, which lives in my work bag – form a partial record of these daily performances and begin to become a part of it. Continuing to take these over a period of time, a viewer could tell a lot about me; other people who have no fixed location for their work could identify with the viewpoint these pictures are taken from; day by day they would grow into a body of work…

And now, is this a still life? 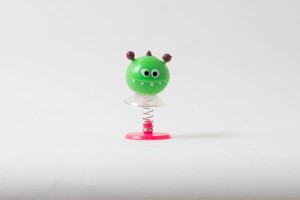 I think it may be.

At the same time I was packing stuff away before moving, I set up a diffused stobe and a paper backdrop to act as a small ‘stage’ for taking photographs of individual objects, stripped of their context. This creature can be seen along to the right in the picture of the mantelpiece. Where fig.2 could be placed towards the documentary end of a spectrum running from found to constructed, this lies at the other extreme, tending towards the status of an advertising pack shot. Similarly fig.1 is devoid of context but perhaps alludes to such ideas as ‘walking a mile in someone else’s shoes’ and life as a journey. There is scope for the viewer to inject some of their own sense of self into my photograph, or possibly just to identify something of me and the things I may have done while wearing my battered Converse.

In the chapter on Still Life in Bate (2012) there is discussion of how the blank background of this sort of commercial photography can be seen as representing  death or eternity while the object pictured stands between the viewer and their inevitable demise. I like this as an underlying concept, with its beginning of an idea of what certain strands of my photography may be ‘for’. I think I shall try and develop this further, but probably not during the time remaining to me during this module…