Taken on the way back to work after lunch one day, as I passed Oxford Circus tube and then walked up to the front of All Souls’ Church. 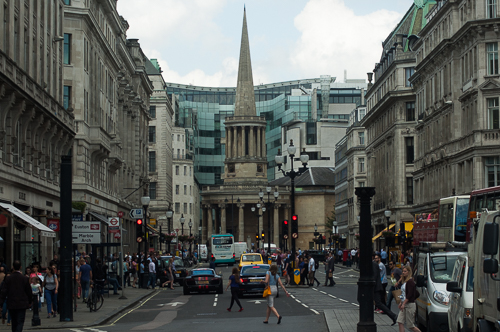 Again, while I knew what to expect, I hadn’t actually done this systematically before. And while some of the difference between the two pictures can be put down to the first being taken with the lens pointing fairly close to straight ahead, while the second was pointing seriously up (it would have been nice to have been able to float 20 feet or so up, but levitation wasn’t possible that day and I don’t know anyone who owns a tilt/shift lens) the difference in the sense of space is still quite remarkable! The openness of the second contrasts strongly with the flatness of the first; claustrophobia gives way to a sense of space dominated by the sky behind the church.