You can create as many pictures as you like but, in your reflective commentary, explain how you arrived at the final edit. The set should be concise and not include repetitive or unnecessary images. Be attentive to this aspect of production.
Some questions to consider are:
• What order should the images be shown in?
• Are there too many repetitive images?
• Do you need to let go of earlier images because the project has changed?
• Are you too close to some of your favourite pictures and they don’t fit the sequence?
• Do you need to re-shoot any for technical reasons?
• Are there any gaps that need to be filled?
IaP coursebook – p.71

Recap: The Initial Idea – A journey in three parts with two entr’acts

Like anyone who wants to optimise their journey, I have worked out exactly where to stand on the platforms and which carriage to get into in order to shave as many milliseconds off my commute as possible. I am sure I am not alone in this…

The previous post details how I got to the point where I had a lrge enough body of photographs to start off a rough edit. My intention was to end up with between 15 and 20 pictures, split into five sequences: Walthamstow; Victoria Line; Change at Oxford Circus; Central Line; White City.

The travelling sequences (two and four) proved easiest to put together…

There is an obvious linear order here, and a sense of rhythm and movement provided by red pole cutting each image in two vertically. The pole is of course colour-coded to indicate the Central Line (contrasting with the pale blue of the Victoria Line). And of course, I appear in the second image, distorted in the mirror of the window  – another commuter, but one with a camera – while my newspaper appears at the bottom corner of the third, mirroring that of the woman opposite.

This was another sequence that came together early on. It feels much more crushed and dark, with the movement provided by arrows and diagonals an tilt rather than the repetition of poles.

It would have been easy to go on taking pictures like these, but heeding David Hurn’s warning  not to reshoot the “gimmes” but to get on with the other things you were trying to photograph, I tried to concentrate on the bits that didn’t work yet – the ‘in’ and ‘out’ sequences and the interchange at Oxford Circus.

Sequence 1 – the start of the journey

I had intended to balance the White City/Destination Sequence with an opening group of pictures located at Walthamstow Central Station. It was all a bit literal and ‘sign-y’.

Pictures two and three both could be re-shot (two needs to be taken later in the day, when the sun has moved round to light the flat, north-facing sign; three to remove the woman walking towards the camera) but overall everything starts out well. On the plus side, the first picture managed to contain a lot of red and pale blue which would establish the overall colour palette from the off. 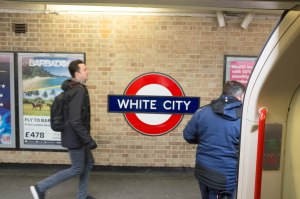 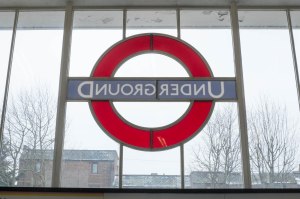 I began trying to arrange the sequences in a less linear fashion. In part this was to try and get around the way the exchange sequence needed to swap direction of travel from left-right to right-left. 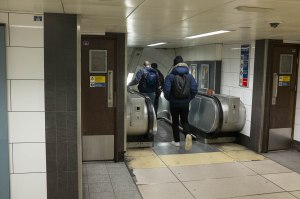 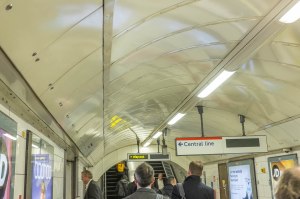 These work as pictures (I particularly like the radiating lines on the ceiling  in fig.1 and fig.3) but lack focus as a description of how I find my way through the station. There are figures who act as my proxy, the signs point the way, and the two escalator pictures continue the change of direction, but it doesn’t work yet as a sequence. I began to wonder how it could be expanded (and how the other sequences could be contracted to compensate).

I had already taken the photographs that included the markers (bubbling paint and a plaque with a stripey red line indicating something or other to people in a different sort of know from the one I occupied) I used to indicate where I should stand to get onto the right carriage of the second, central line train: 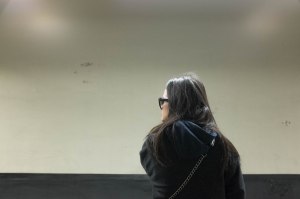 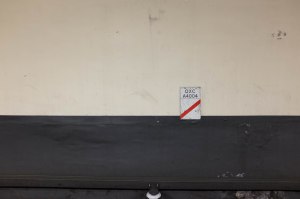 What I couldn’t do was to find a way to fit in the other marker  – a bin that is pretty much directly behind the dark haired woman in the paint sequence:

I took other pictures in an attempt to fix it, but they didn’t really take off either. I made more prints and stuck them to the wall. I grouped different pictures into different sequences, organising them into chronological order or other ways indicating movement:

Building Block 2 – a Central-Line train passes through the station

For Example, I had already assembled this linear sequence. I had a lot of material to go between image 1 (train leaves the station, revealing the wall-plaque) and image two (woman in a parka in front of a train entering the station.

You don’t really see people’s faces on the tube, at least in part because of the rules we’ve absorbed about not staring… I tried to pick up on some other people waiting: 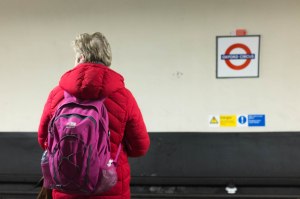 And then, trying to get some pictures to indicate arrival at Oxford Circus, I took these: 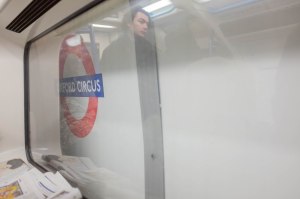 And it was with this group of three  – with a window acting as a fantastic mirror and with the camera and the train moving from darkness into light – that I got the final thing I needed; I thought of Paul Graham. There was movement and the station sign provides a definite location for what is happening. It would work nicely as an in media res (opening in the midst of an action) beginning. Could I lose the pictures that had been penciled in before these? Possibly I could drop everything I had planned to put earlier and concentrate on this stage of the story, while I was moving through Oxford Circus.

Perhaps it could move away from a prosaic description of my everyday reality and become something more subjective, more poetic even. I moved more pictures about on the wall, bluetacking them into new groupings…

I needed something to break up the arrival and departure of the Central Line Train. I had a lot of pictures taken while a train was in the station.

This is some of them; when you have people streaming both from right to left and from left to right, and you have people moving towards you from a train and moving away from you into a train, it’s quite hard to get a decisive moment but they could be narrowed down into further related sequences, and I had pictures that included quite a few of the people who featured in the ‘waiting’ pictures. 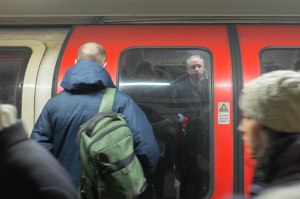 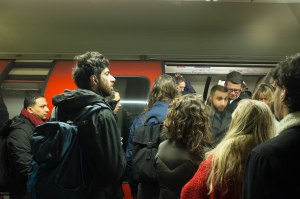 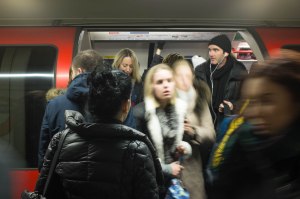 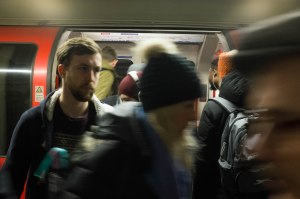 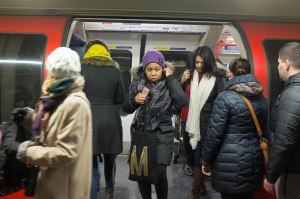 And then, to finish it off, follow the woman in the red coat from BB3:

…let the train exit the station: 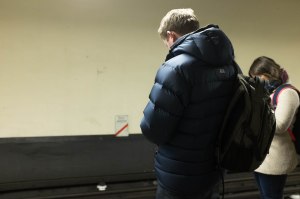 And close on the beginnings of the build up of people waiting for the next train.

I tried to balance the individual sequences as if they were balanced verses in a poem rather than paragraphs of prose, and ended up with eight sequences of 3, 2, 4, 4, 4, 4, 2, 3  pictures respectively (giving 26 pictures in total). It could still come down a bit, but at this point, I felt I had the good first draft that I had been looking for.