Towards the end of my assignment four tutorial, I outlined what I thought I would do next: a typology of play-park furniture (slides, swings, climbing frames, things like that) taking Bernd and Hilla Becher’s industrial forms idea and applying it as a way of commenting on my identity as both a parent and a photographer. I would take the pictures (as far as possible) using a medium format film camera; they would be in colour; light conditions would be low-contrast; there would be no foreground figures. I even went so far as to start taking the pictures.

I like both of these, but it wasn’t really working out. To get pictures without kids climbing over the equipment, I’d need to be able to get to the various play parks either early in the morning (for pictures that would work while looking west) or the evening (while looking east); finding the time to zoom off on my bike before or after work wasn’t really practical while I was trying to pack up stuff before moving house. To get the low-contrast pictures I wanted called for days when the weather wasn’t bright and sunny and this summer hasn’t been very good for that.

Reluctantly, I put the idea (and its related sub-set of benches in play parks where I’d wearily sit while Alice or James ran around climbing or sliding or swinging) to one side and cast around for something that would be suitable for the assignment but did not require me to find lumps of non-existent time to complete it.

Then, one day I paused and looked down towards the ground. This is what I saw (or at any rate  a photo of a reconstruction of what I saw).

fig.4 – portrait of the artist in red desert boots

Which did not necessarily conjure up the image of a middle-aged bloke that stares back at me when I catch a glimpse of myself reflected in a shop window or in a picture of me taken by someone else. 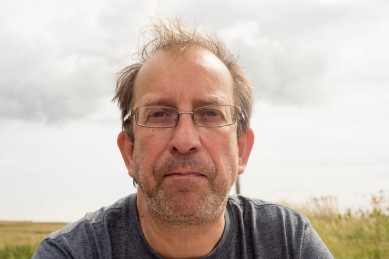 fig.5 – picture of me taken by my son

I began thinking about shoes and the messages about their wearers encoded in them.

Earlier this year, I attended an event where one of the speakers – as an aside – said that you could tell an awful lot about people from looking at their shoes. It was easily the most interesting thing anyone said that day and I began to think about approaching a range of people at work and seeing if they’d let me take pictures of their empty shoes, lit and presented as still lives. The resulting pictures would then be presented as a set,  identified with their job titles and the associated salary band. Again, an interesting project, but one that I haven’t got round to doing anything with yet.

Then, one day shortly after I’d moved house, and shortly after I’d stood staring at my feet, I was sitting on the tube fiddling with the settings of my camera (possibly thinking of Walker Evans or Martin Parr in Japan) when I looked across the aisle and saw this: 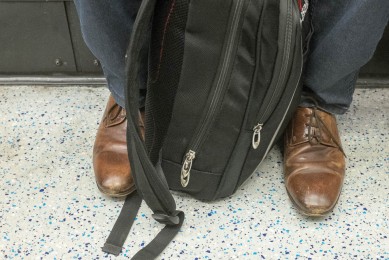 I thought of the old joke about the extrovert engineer who stared at your shoes while he (and it always is a he in this joke) talks to you. And then after I had changed at Oxford Circus (the action described in assignment three), I took a second photograph:

And on my way home that evening, I took another couple of pictures;  I was off and running. The pictures built up quite quickly.

For the next fortnight (the two weeks running up to our break in Orkney) I took pictures of the shoes worn by everyone who sat opposite me on my journeys to and from work. If I wanted to compile a decent typography, I needed  either twelve (three rows of four) or fifteen (five rows of three) subjects to make up a nice grid of variations. I was doing rough edits of the pictures each evening to determine what worked and what I still needed to picture each evening and this fed into the next day’s shooting.

On the 26th of July, I got home from work and emptied my memory card for the final time. Two and a bit weeks later, I got back to Walthamstow from my holiday and began to edit in earnest.

4 thoughts on “assignment 5 – a false start, a new idea and taking the pictures”