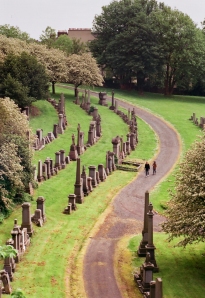 This weekend I had a couple of totally free hours that I filled by going to the Necropolis for the first time in around 30 years. Back then it was all fairly dilapidated – I think you weren’t even meant to go in in case a vault collapsed under you – but now it’s been cleaned up, made sound and become part of the tourist experience.

As I spend a fair amount of time in Glasgow, I keep a Pentax Spotmatic-F and a set of lenses there to cut down on the amount of luggage I need to take with me when I travel up from London. Glasgow is also where I get film developed, at the Snappy Snaps on Byres Road, so if I finished the film I already had in the camera, there wouldn’t be a delay in viewing the results.

The Necroposlis sits on a steep hill separated from the cathedral by a steep valley and if you look back as you follow the twisty path up towards the monument to John Knox, there is a fine view west. I realised that this was probably as good a place as any to work through lenses with a variety of lenses:

The camera was on a tripod, but some adjustment was made for composition as the frame tightened. All exposures, 1/250th second at f11. Film used 400 asa Fuji Superia.

The picture at the top of this post was taken later, on the other side of the hill looking east. It may form part of Assignment 1.

1 thought on “a couple of hours in the necropolis”