“For this exercise produce between four and six photographs which are deliberately lighter or darker than average, and say why in your written notes.”

It was a bright day but with a typically flat, winter sky when I was leaving Reading Station, and an initial shot, taken at the setting indicated by the camera’s meter merely looked gloomy, whereas the scene was actually quite light with a lot of pale concrete and white hoarding; By overexposing by about 2/3 of a stop, the scene lightened to a point fairly close to what it looked like to my naked eye, without the coloured barriers and the red detailing on the building washing out.

Here the lights had gone out on the platforms (the square of bright light at the far left of the picture is emergency lighting) and there was a lovely natural vignette around Sainsbury’s behind and below the station. I exposed for an average of the lit area both to preserve the darkness of the station and to prevent the highlights blowing out, apart from the emergency light. The colour is nice too! 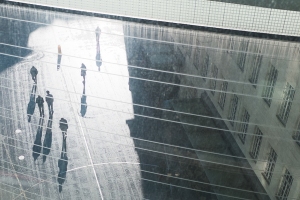 The reflection of the sun off the wet paving of the plaza and the dirt and etching on the sheet glass of the front of the building all needed to be as close to overexposure as possible here in order to get a sense of the glare, looking south towards the sun. I could have pulled the blacks down to increase the overall contrast of the picture (and to make the blacks blacker) but the effect of facing the low winter’s light would have been lost.

While this is much, much darker than average, giving I think a nice idea of the gathering night while walking home from the marshes. The only things brighter than average are the patches of light shed by the streetlights and the pleasantly windy line of the streetlights themselves leading the walking couple (and us) home. The colour is nicely concentrated without being simply black blackness as well.

All of these have a relatively low dynamic range in the most part – there is always something much darker or much lighter in there, but it doesn’t dominate the picture and generally is well over on the other side of average exposure – so it is easier to play with the relative darkness or lightness of the bit that you’re worried about. Providing the sky doesn’t  blow out, or the areas of darkness just turn into an inky nothing, the picture works…

“Now take five or six different photographs, of any subject, but for each one make five exposures, arranged around what you have measured as the best exposure. The first should be one stop darker, the second half a stop, the third average, the fourth half a stop lighter and the fifth one stop lighter. When the photographs are ready to view, look first to see whether or not the central exposure is, as you would expect it, what you wanted. Next, which, if any, of the other exposures are also acceptable?”

The camera I used for these does not allow half-stop variations of exposure, so these all work in thirds I took many more of these sequences, but here are three that I quite like and which do show quite a bit of difference as they move from under- to over-exposure.

This first sequence (in Chingford, looking roughly west as the sun sank on Christmas eve) is dominated by the contrast between the brightness of the sky and the darkness in the streets; whatever metering mode was available to me (program, average or spot) had difficulty dealing with this, and as a result, the pictures only really begin to approach an accurate rendition of what the scene looked like, once they move into underexposure. The final picture is probably my favourite with the sky showing blue enough for the moon to stand out, while there is definitely a sunset happening and the street lamps and decorations are all showing quite strong colour. There is more detail in the shadows in the -0.33 and -0.66 pictures, but by the time the exposure is “correct” or over exposed, the dark areas are becoming thin, with the sillhouetted trees being particularly thin.

This sequence was also taken on Christmas eve, but earlier and looking east with the sun higher and behind me. The 0EV picture is quite an accurate depiction of how I remember the scene, but both the overexposed shots and the first underexposed one are acceptable, reflecting the way the less contrasty scene here offers more leeway to lighten or darken the picture overall, before everything falls into treacly shadow and the colours become less differentiated (particularly the yellows and greens of the foliage on the island) in the -0.66 version.

The final sequence was manufactured from one image by adjusting its exposure in Lightroom. The streetlamp always burns out, although the halo of light that surrounds it gets less intense as the pictures get darker. The “correctly” exposed picture is about right for how the scene felt at the time. In the lighter pictures, the glare of sodium lighting off to the rear of the house becomes increasingly lurid as the picture is moved towards overexposure and the way the path and leaves are lit becomes more and more as if it were day rather than night; similarly the surfaces – the tree in particular –  which are catching bits of orange sodium move towards an unpleasant lime/yellow. The two underexposed pictures work quite nicely, I feel with the streetlamp in particular and the leaves catching its light becoming more pleasing as the overall exposure moves further into darkness.

Generally, I think what I have got out of this exercise is that there can be a lot more latitude in terms of under and over exposure than I may have been aware of before, but that probably it is best to err on the side of slight underexposure, unless you definitely want something lighter, if only to concentrate certain of the colours present in the scene in front of the camera.